"Those who tell the stories rule society," by Plato. 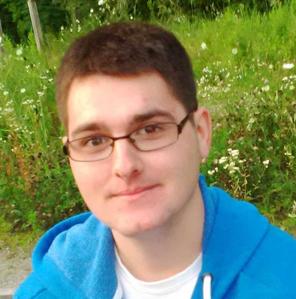 Hi. Everyone! I would like to welcome you to my site! My name is Tyler and I am a writer. I have Asperger's syndrome, which is on the Autism Spectrum. This means that I have trouble socializing with people and I find it difficult to talk about topics that are not of my interest. When I was younger I felt like noises were too loud, lights were too bright, people were too close and my mind raced. I was obsessed with superheroes and I had many physical traits, like jumping and pacing and hand flapping that I couldn’t control. I didn’t know how to deal with any of this and sometimes I became volatile towards people.

I was born in September of 1991. Ever since I was born I have lived in-between two worlds. One being the “real” world and the other is “my world.” In my world I see other planets, civilizations, castles, dragons, and other species that I have forged with my imagination. When I was very young I tried to act out these characters to get them out of my mind. Then I tried to draw them. I was obsessed with this and therefore was unable to learn at school. I just wanted to draw and be alone. I had a mental block that I just couldn’t learn to read or write. Finally when I was in grade four I began to read words on the computer because there were superheroes there. I could click on “Superman” and a picture of him would come up. This is how I finally learned to read. Eventually, I learned how to write my ideas into stories.

Up until this time I had been diagnosed as having bipolar disorder, Tourette syndrome and obsessive compulsive disorder. I had also been hospitalized frequently because I was unmanageable. The ASD (Autism Spectrum Disorder) came later when a doctor realized I had made no social connections and that what they thought were tics were actually self-stimulating behaviours.

I have written my novels to entertain other people. I want them to be brought into another universe, world, or reality, where they can leave their problems behind, and travel to these places and become lost in the accomplishments of my great heroes, and the casualties of my villains. In life we never know where we are heading, but if we have a goal, and a vision, we will eventually reach where we are destined to go. And, that is the reason for life. I believe that everyone on this Earth has a purpose, and it is in the individual to find the answers and purpose for their existence. I have found mine and it was to tell my stories.

I have written a superhero novel called: "The Anevaerian Guardian," and its sequel:  "Anevaerian Guardian: Eternity." I have also written two fantasy novels called "Conquerors of the Ancient Star," and "The Silent King." If you choose to read them I hope that you enjoy them!

Well, I just wanted to tell you a little about me and explain why I have created this website. In this database we can both unite, and we can experience my fantasy world together!